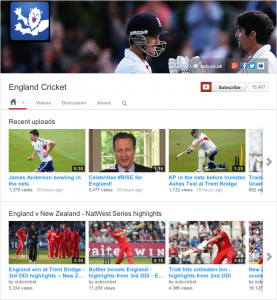 The England and Wales Cricket Board (ECB) has signed a deal with YouTube to stream the Investec Ashes Series live in 53 countries across Europe and Latin America.

The deal marks the ECB’s first move into online live streaming of cricket, with the games to air through ECB’s official YouTube channel – already home to highlights, short clips and interviews.

“We receive numerous requests from cricket fans in regions where there is no broadcast TV offering, and therefore we are delighted that many will be able to enjoy this Investec Ashes Series. It is also important that we play a role in the expansion of the game to countries that do not traditionally play nor watch the sport,” said David Collier, chief executive of ECB.

“Our partnership with the ECB expands the reach of the Investec Ashes Series to new countries and to YouTube’s younger, connected audience.”

The live ECB service begins on July 10, on day one of this year’s first Investec Ashes Test at Trent Bridge.