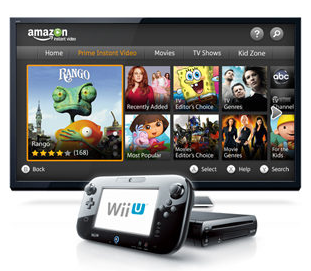 Online retailer Amazon has struck a deal with Nintendo that will allow gamers to watch movies including The Avengers and TV series including Sons of Anarchy on the Wii U console.

The deal will see Amazon’s Instant Video app available on the console, which means that more than 140,000 movies and TV episodes will be available.

The arrangement will initially launch in the United States but Amazon is expected to roll out its service internationally.

Movies include Brave, The Amazing Spider-Man, Men in Black 3, The Hunger Games, and Madagascar 3: Europe’s Most Wanted as well as TV series including The Walking Dead, Sons of Anarchy, Revolution, and Big Bang Theory.

“We’re constantly working to create the best streaming video experience for our customers, and to do that it’s essential to provide access on as many devices as possible,” said Anthony Bay, vice president of worldwide digital video for Amazon.com. “The Amazon Instant Video app on Wii U gives customers more ways to enjoy video in the comfort of their home. The second screen experience lets customers browse, search and even play movies or TV directly on the GamePad controller. In addition, new features in the app allow kids and parents to easily discover family-friendly programming for all age groups.”