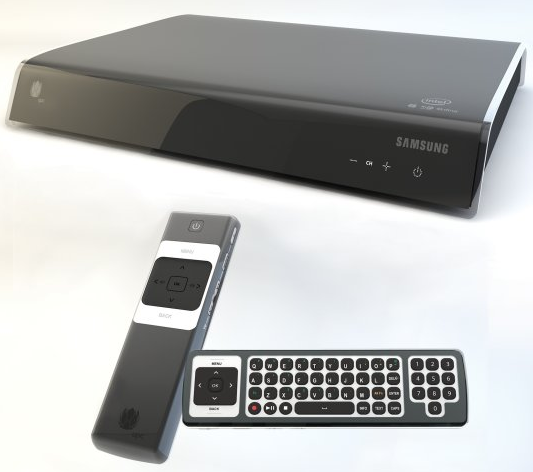 Liberty Global has launched its Horizon TV product in the Netherlands, with Switzerland to follow next quarter and Germany and Ireland next year.

The Horizon box, made by Samsung with a user interface provided by NDS, includes 1024MB of RAM, 256MB of Flash memory, six DVB-C tuners and a 500GB hard disk.

The box is based on an Intel PUMA core and includes two WiFi chips – one for LAN connectivity and another provided by Celeno to deliver HD content through the home. The box connects via 802.11-based wireless in 2.4GHz and 5GHz and also includes a MOCA 1.1 capability for in-home coax.

Introducing the product at IBC in Amsterdam, Liberty Global executive vice-president and chief technology officer Balan Nair said that the company was also launching Horizon.tv, a browser-based application that allows users to access content on Horizon on other devices over the web. He also said that Liberty Global would launch a companion box next year for multi-room delivery of the service over WiFi.

Horizon includes a recommendation engine from ThinkAnalytics. The TV guide includes a semi-transparent interface that delivers now and next and ‘more like this’ information along the bottom of the screen, while current programme information and the video source is displayed at the top of the screen. Video can come from one of seven different sources including live TV, DVR, VOD, apps and users’ own devices in the home.

The box also delivers fast channel change and picture-in-picture displays of other channels and content sources that can be zoomed into by users, Nair said.

Liberty Global has currently signed VOD agreements with 34 different broadcasters in the Netherlands, providing 4,000 hours of content, mostly free to view. It is also launching with 14 different apps including Wikipedia and YouTube.

Other features include the ability to use the iPad as a remote control or as an additional TV in the home.