News broadcaster Euronews has significantly expanded its presence on connected TVs after signing recent deals with a number of TV manufacturers. 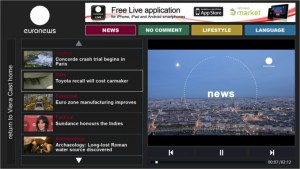 The news channel has signed deals to bring its content to connected TVs from Philips, Samsung, Toshiba and LG as well as Vestel and Loewe via NetRange MMH, an independent manufacturer of white-label products.
Euronews said it was becoming the most distributed international channel on connected TVs. According to the broadcaster the connected TV market is estimated to reach over 123 million sets by 2014.

Euronews’ first connected TV deal was signed with Panasonic in 2010. That was followed by an agreement with Philips in June 2011. It has now announced additional deal with Samsung, who will add the channel to its Smart TV application offering across European markets in the coming months, and with Toshiba for the Toshiba Places connected TV platform.

Euronews will also be added to LG’s connected TV offer, to be launched primarily in France and then expected to be extended to the rest of Europe. The manufacturer will offer Euronews’ application in five languages – English, French, German, Italian, and Spanish – within all LG NetCast TV sets.

Euronews will also be integrated in the NetRange offer by MMH. This agreement will make euronews accessible worldwide on Vestel and Loewe TV sets.