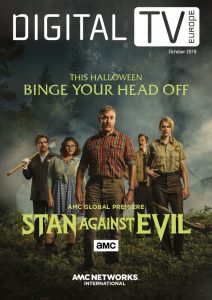 As autumn rolls around it’s time for the Content Innovation Awards and much of this issue of Digital TV Europe is devoted to this year’s shortlist and some of the winners who will be celebrated on the night.

YouView CEO Richard Halton has overseen the UK hybrid TV service from the strategy phase to launch and has run the company since before the platform went live in 2012. As he prepares to step down at the end of the year, he picks up the winner of this year’s Services to Broadcasting Award and talks to us about his journey at YouView and what comes next.

Another notable winner is Ben Lavender, who scoops the first ever Content Innovation Award for Outstanding Digital Achievement. Lavender has already had an illustrious career in which he created the BBC’s iPlayer, launched LoveFilm, and when it was acquired by Amazon followed with it to work on Amazon Instant Video. Now DAZN’s chief product officer, he talks about digital disruption in the live sports space.

The fourth edition of the Awards will again be held in Cannes just ahead of the MIPCOM programming market. The event, a gala dinner in the Grand Salon of the Carlton Hotel on Sunday October 14, will showcase the achievements of a highly impressive line-up of content, technology and distribution providers.

Run by Digital TV Europe, in partnership with our sister title TBI, the CIAs are designed to recognise innovation from players in all parts of the content creation and delivery chain – this year with an expanded list of awards covering several new areas.

These include awards for Advanced TV Service of the Year, TV App of the Year, and Live Streaming Initiative of the Year. Meanwhile, on the content front, we will be recognising for the first time Best Debut and Best Returning Drama Series, Best Musical Format, Factual Entertainment Programme of the Year and Best Digital Original.

The entries highlighted here show how the industry is evolving, with a growing emphasis on direct-to-consumer OTT services and the technologies that underpin them, awards related to social engagement and YouTube channels, as well as innovations like next-generation advertising and virtual reality. These are all celebrated alongside some of the good old formats, entertainment shows and dramas that have made waves over the past year.

With the pace of change accelerating in the TV sector, the relevance of the Content Innovation Awards – bringing innovators in technology and content together in a unique setting – is only likely to grow.