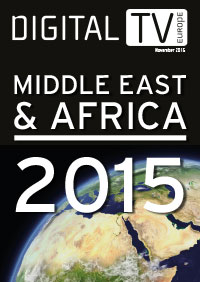 The Middle East has seen strong growth and increasing competition amongst pay TV players in recent years, with OSN and BeIN Sports fighting to attract subscribers.

Recently, the region has also seen the emergence of OTT players, encouraged to launch offerings targeted at a digital-savvy younger generation used to consuming content on mobile devices, the latest entrant being US player Starz. In the 2015 edition of DTVE Middle East & Africa, we survey some of these developments, including interviews with key players, and look at the continued importance in the region of tackling piracy.

Africa is now seen one of the world’s growth hot-spots, outperforming emerging markets elsewhere. A number of new pay TV services have emerged, often targeting emerging middle-income groups that find the premium offerings of MultiChoice beyond their reach, while existing players have launched new initiatives to capture this segment of the market.

In our 2015 issue of DTVE Middle East & Africa we interview two of sub-Saharan Africa’s emerging pay TV operators – StarTimes, which has expanded across multiple territories with DTH and DTT-based services, and Consat, which has targed middle-income subscribers in one of the continent’s key markets, Nigeria.

Finally, we survey the plans of one of the most innovative content players targeting the African market, France’s Trace, which has moved beyond simply offering TV channels to become a player in mobile, events and content creation.