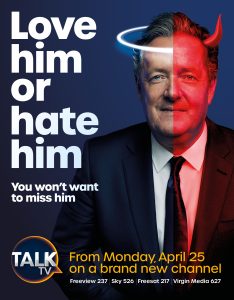 The channel will kick off with The News Desk hosted by Tom Newton, followed by Piers Morgan Uncensored broadcasts at 20:00 and The Talk, featuring Sharon Osbourne, at 21:00.

TalkTV will also be streamed via Amazon Fire TV, Apple TV, Samsung TV Plus and on YouTube, as well as via the channel’s website and iOS and Android apps, which will include live, catch-up and VOD functionality. TalkTV will also be available via Facebook, Instagram, TikTok, Snapchat and Twitter.

As part of the partnership with Sky, TalkTV will also be launching on Sky’s new streaming TV, Sky Glass, in the coming months.

Morgan’s show will be broadcast on weeknights in the UK on TalkTV, streamed on Fox Nation in the US and aired in Australia on Sky News Australia.

“Launching at 7pm on Monday 25 April, TalkTV will be a new voice for viewers who are interested in straight talking opinions and world-class expert insight on news and current affairs. I’m delighted that the channel will be available to everyone in the UK via Sky, Virgin Media, Freeview and Freesat,” said News UK EVP, president of broadcasting, Scott Taunton.