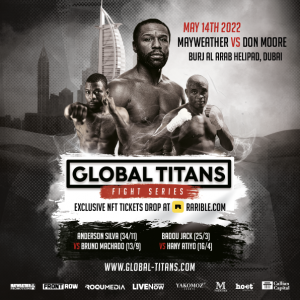 LIVENow, the sports streamer founded by Andrea Radrizzani, the chairman and founder of Eleven Sports parent Aser Ventures, has secured rights to Global Titans Dubai, a boxing fixture in the UAE that will see Floyd Mayweather take on Don Moore on May 14 on the helipad of the Burj Al Arab Jumeirah hotel complex.

LIVENow have secured rights to sublicense and stream the event live[1].

The 40 tickets for Global Titans Dubai will be sold as NFTs, which LIVENow says is a first for international boxing. The NFTs will be launched on NFT marketplace Rarible.com. Each NFT ticket holder will have access to collectible features including exclusive official fight videos, photography from the event and a 3D VIP ticket.

In Singapore, LIVENow has rights to live pay-per-view coverage from the English Premier League throughout 2021-22, and was the exclusive home for Euro2020 championship last summer. It also distributed Euro2020 in the Philippines and streamed the Emirates FA Cup, Italy’s Serie B and Serie C, US Open, IHF’s Superglobe and the Tyson Fury vs. Deontay Wilder fight.

Head of sport at LIVENow, Peter Leible, said: “We’re delighted to be appointed the official media partner for Global Titans, broadening our position as not only a premium live streaming destination but also a distribution partner for live sport events. Global Titan’s is going to be a unique event, with only 40 fans in attendance. This gives us a special opportunity to serve millions of boxing fans who cannot be there in person with the full broadcast live from Dubai.”