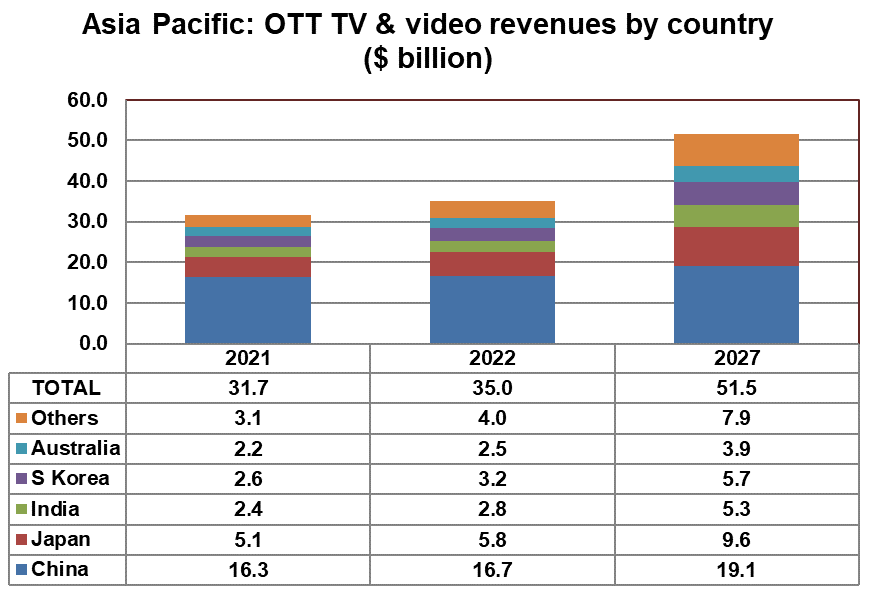 OTT revenues for the APAC region are set to surpass US$50 billion within the next five years.

According to Digital TV Research, OTT TV episodes and movies revenues for 22 Asia Pacific countries will reach US$52 billion in 2027. This is up by 62% from the US$32 billion recorded in 2021.

While by no means the largest market, Japan is set to contribute the most to this US$20 billion addition. The Japanese market is predicted to add US$5 billion in revenues, with China, India and South Korea each adding US$3 billion.

China, which is the overwhelmingly dominant force in APAC OTT, will see limited growth as a result of the Chinese government’s clampdown on fan-based culture. This has also had an effect on subscriber counts.

Tencent Video, China’s largest streamer, saw its subscriber base increase by only 1% in 2021, while second-placed iQiyi lost 6 million subs in the same period.

Simon Murray, principal analyst at Digital TV Research, said: “Can one country make that much difference? China was responsible for 37% of Asia Pacific’s OTT revenues in 2021. Luckily, there is plenty of growth elsewhere.”