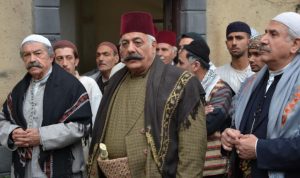 A consortium, led by E-Visions telecoms parent e& (fka Etisalat Group), has struck a binding agreement to take a 57% stake in the SVOD, with the deal valuing the company at US$420 million.

E-Vision’s existing stake and secondary investments will be rolled into the new structure, joining other existing shareholders which include Starz and SEQ Investors.

US-based Starz and its parent company Lionsgate will maintain commercial agreements for content licensing to the venture. The transaction remains subject to regulatory approvals.

Dubai-based Starzplay Arabia was first launched in April 2015 and now claims close to two million subscribers. The service streams Arabic and Hollywood content to 20 countries across the Middle East, North Africa and Pakistan.

Benchouche and co-founder & CEO Maaz Sheikh also explained why Starzplay Arabia had positioned itself as the “home of anime” in the region and highlighted the immense ratings draw of Arabic soap operas such as Bab Al-Hara.

The acquisition is part of E-Vision’s plans to expand its content aggregation strategy and profit from the growing demand for streaming in MENA region. This will enable the launch of services, the company said, while the deal also provides potential for international expansion, leveraging Starzplay Arabia’s reach across 20 global telcos.

In return, Starzplay Arabia will be able to offer shows delivered by both E-Vision and ADQ to subcribers, “further optimising” its content acquisition spending. The streamer also aims to gain further scale through accessing e&’s customer base.

Maaz Sheikh, CEO & co-founder of Starzplay Arabia, said: “The investment by E-Vision and ADQ will enable us to grow further by focusing on original content production and advanced customer personalisation.”

Khalifa Al Shamsi, CEO of e& life and chairman of E-Vision, called the acquisition “a major milestone for E-Vision” and explained: “This investment further strengthens our service offering and significantly enhances Starzplay Arabia’s positioning across the entire MENA region.”