Eleven Portugal on course to break even with 300,000 subscribers 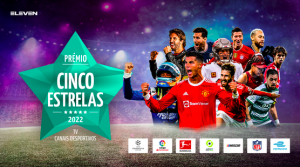 Eleven Portugal is reportedly close to 300,000 subscribers, with the broadcaster confident of breaking even during the 2021-22 season.

According to SportBusiness, the broadcaster is targeting Portugal’s domestic top flight football league – Primeira Liga – to complement its existing portfolio which includes the UEFA Champions League, Bundesliga, Ligue 1 and English Premier League (the latter of which starts from the 2022-23 season).

The news came as part of an interview between the outlet and Eleven Portugal’s managing director Jorge Pavão de Sousa. He said that the broadcaster expects a positive EBITDA at the end of the season.

The broadcaster’s growth to almost 300,000 subscribers has been attributed to the success of Benfica, Porto and Sporting Lisbon, which have all qualified for the Champions League group stages this season, along with the return of Formula 1’s Portuguese Grand Prix after almost a quarter of a century.

Looking forward, de Sousa said that the company is targeting a 40% share of Portugal’s premium sports subscriptions by the end of its first full season of Premier League coverage.

The exec however added that “there will be a need to have a price increase” in the future, predicting that competitor Sport TV would likely also be increasing its subscription costs. He said that “We are now engaging in some discussions about having entry packages that are of more benefit to the end user and this is [also] where we need to all work together to control piracy.”

De Sousa’s interview came as Eleven Portugal was named as TV Sports Channel of the Year at the 2022 Prémio Cinco Estrelas.