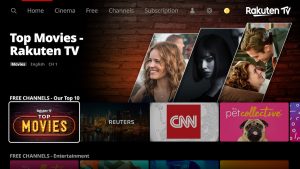 The new additions will offer a variety of entertainment across lifestyle, nature, film, animation, music, and culture.  All the channels are either available immediately or set to launch within the coming months, Rakuten said.

The new channels focus on film and television, business, sports, and lifestyle.

Wild Side TV from Wild Bunch is a new free-to-view (AVOD) film channel, offering independent cinema from around the world.

Zylo’s Emotion’L is a film channel aimed at women with a mix of romance, comedies and thrillers, while Zylo’s Ciné Nanar Channel, is a new FAST channel dedicated to a mixture of nostalgic movies that focus on action, disaster and creature movies in the fight and sci-fi/ fantasy realm.

All channels are available immediately except for World Poker Tour, Motorsport, Emotion’L and Ciné Nanar Channel, which will come to the platform in the near future.

Rakuten TV linear channels are currently accessible for free on the Rakuten TV app on selected Samsung, LG and Vestel Smart TV devices. Users can launch the app with a single click through the branded remote-control button and the pre-installed app.