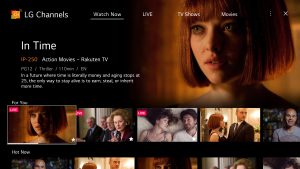 AVOD and FAST channel operator Rakuten TV has expanded its content offering in the UK with the rollout of five channels on the free premium content streaming service from LG Electronics, LG Channels.

Rakuten is already featured on LG Channels in five other European markets.

In addition to Rakuten TV’s own curated content, the platform has reached an agreement with LG Electronics to expand available content by including new live streaming channels from third parties, including CNN in Germany and the UK, and ¡HOLA! in Spain.

Rakluten’s partnership with LG Electronics, , in addition to content, also focuses on service enhancements such as the integration of a Rakuten TV branded ‘hot key’ on the latest LG Magic Remote.