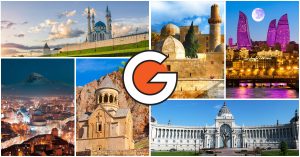 The international cloud and edge solution provider has opened new CDN points in the capitals of Armenia and Azerbaijan, Yerevan and Baku, and launched an extra CDN cluster in Kazan in Russia.

It says that the point of presence in Kazan, the capital of the Republic of Tatarstan, has decreased average response time to 15 ms, citing independent analytical system Citrix.

Starting this year, the global network of G-Core Labs also spans Armenia. The company launched a CDN location in its capital, Yerevan that it says allows the company to deliver content with delays of about 5 ms.

The company’s CDN accounts for 120+ points of presence in over 100 cities worldwide.

The company says that future short-term plans include the launch of a location in Uzbekistan.

“In 2021, we bolstered our CIS infrastructure. The launch of three new locations allowed us to set new content delivery rate records in the region among local and international providers. Minimszing delays with CDN propels online business development, especially in areas requiring peak speed under high loads. The fast content delivery is essentially important for any online business. Speeding up the website fuels conversion and preloading the content relieves the client’s own infrastructure,” said Sam Davis, Vice president of products at G-Core Labs.