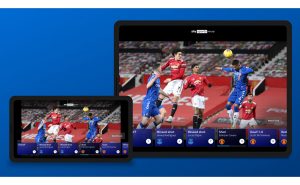 Pay TV giant Sky has made a number of changes to its flagship Sky Q offering including introducing the ability to switch between apps and back to Sky using voice, the ability to record what users are watching on live TV with new voice commands, and the launch of a Sky Sports Recap service on Sky Go for iOS.

The new voice features enable customers to move between apps quickly using voice without the need to go back to Sky Q home.

Subscribers can also use a ‘home’ command to get to the Sky Q home page or tune in to a specific channel with a voice command, for example by saying “Watch 101” to start watching BBC One.

Other new voice commands include “record” or “record this” to the voice remote while watching live TV, to record the rest of the episode or film a user is watching.

Sky has also introduced a dedicated page for Audio Descriptive Content. The voice command “Audio Described TV” enables users to access hundreds of audio described shows and movies to to record and watch later, according to Sky.

For Sky Go, a Sky Sports Recap is launching, enabling users to catch up on highlights during live Premier League and EFL matches. This is available on iOS devices by pressing ‘Recap’. To exit, users can press ‘watch live’ and return to the live game. The feature will be introduced in the near future on Android and desktop devices.

Sky has also introduced a new ad skipping feature, though only for selected content.

All users will also now be able to download shows to a device to watch without an internet connection. This feature was previously only available to Sky Go Extra and Sky Q Multiscreen subscribers.

Sky is also increasing the number of devices users can stream on at once, with all users able to stream on at least two screens, instead of one. Customers with Sky Q Multiscreen or Sky Go Extra will continue to have access to four concurrent streams.

Fraser Stirling, Group Chief Product Officer, Sky, said: “The latest improvements to Sky Q’s voice control makes it easier to quickly switch between your favourite apps and channels, plus with Sky Sports Recap on Sky Go, sports fans, like me, will never have to worry about missing out on any of the action again. We’re continuing to make it even easier to enjoy the entertainment that matters to you.”