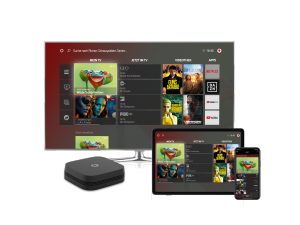 Vodafone Deutschland has made its GigaTV Cable Box 2 the standard box across its entire German footprint, replacing the Horizon set-top used across the Unitymedia and Kabel Baden-Württemburg networks it acquired from Liberty Global.

Vodafone is rolling out a new standardised set of international channel packages that are distributed over IP rather than via DVB-C cable broadcast. Access to these packages is only available via the GigaTV box, meaning that subscribers in North-Rhine Westphalia, Hesse and Baden-Württemburg with the old Horizon boxes will need to be switched out to receive them.

The GigaTV Cable Box 2 was previously included in the operator’s premium tier offering for new customers in the three states where it acquired Liberty Global’s networks. However, it will now be part of the standard GigaTV Cable offering in these states.

the GigaTV Cable Box 2 comes with a removable hard drive with a 1TB storage capacity, UHD capability, personalised recommendations and universal search and the ability to simultaneously record four channels, along with voice control and access to multiple streaming apps including Netflix and DAZN.

The box is a requirement for receiving Vodafone’s new range of foreign language content packages. The operator has hitherto offered 14 such packages in the former Liberty Glboal states and eight packages in other parts of Germany. From now on, with a switch from cable broadband to IP, it will offer 17 packages nationwide. The previous DVB-C-delivered services will be switched off at the end of the summer.