Albanians and neighbouring North Macedonians pay the most for their broadband access as a proportion of average net salary in Europe, while the Swiss pay the least – despite the average annual cost of broadband in Switzerland actually being among the highest. 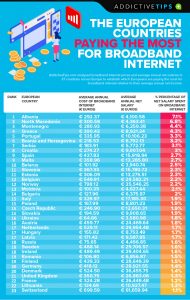 According to an analysis by AdictiveTips.com using broadband pricing data from Cable.co.uk and salary data supplied by Numbeo for 36 European countries, Albanians pay 7.1% of their average net salary for broadband, followed by North Macedonians who pay 6.8%. The annual cost of broadband in each country is €292.37 and €300.58 respectively, but average salaries in both countries are among the lowest in Europe.

Lithuania, France, the UK and Denmark complete the ‘bottom five’ countries in terms of average broadband cost as a percentage of average net salary, with the percentages ranging from 1.2% in the case of Lithuania and France to 1.4% for Denmark.

At the other end of the range, Montenegro, Greece and Portugal – all countries with low average net salaries and relatively low average broadband costs – make up the remainder of the five most expensive broadband markets.

Among major European markets, Spain comes ninth alongside tiny Malta in the list of 36 countries grouped into 23 positions, in terms of how expensive broadband is as a percentage of salary, with Italy and Poland coming in jointly at number 15, Russia at number 18 alongside Sweden and Ireland, Germany at number 20 alongside Denmark, the UK at number 21, and France at joint number 22 alongside Lithuania.