US to continue impressive SVOD growth despite market maturity 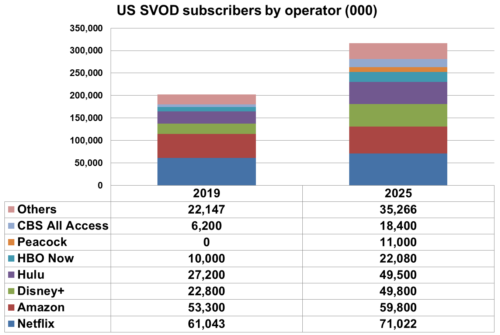 The US will have 317 million SVOD subscriptions by 2025, new figures have shown.

According to Digital TV Research, the number of US SVOD subs will increase 203 million in 2019 to 317 million by 2025 – an impressive feat considering that it is already the most mature OTT market in the world.

Netflix, the longest established platform and biggest operator in the country, will add 10 million subs, but this will be overshadowed by Disney’s SVOD platforms. Disney+ will add 27 million subs, while Hulu – one of the older names in the country – will add 22 million users as Disney increases its focus on original content production.

Newcomers HBO Max, Peacock and Paramount+ will similarly add more subscribers than Netflix, with the six bringing in 94 million new subscribers. These newer players will account for 82% of the 114 million total additions.

Of this new crop, WarnerMedia’s HBO Max will emerge as the fifth largest US SVOD with 22.1 million subscribers, though this has the benefit of building on HBO Now. Paramount+, which will launch in 2021 as a rebranded version of CBS All Access, will have 18.4 million subs. NBCUniversal’s Peacock will have 11 million, though the platform is being built up as a hybrid A/SVOD, with a large number of users expected to be viewing for free.

Amazon meanwhile will continue to be the second largest player, but will only see modest growth from 53.3 million to 59.8 million.

Other players including the likes of Apple TV+, AMC’s Shudder and ViacomCBS’s Showtime will amass a total of 34.3 million, up from 22.1 million in 2019.

Simon Murray, Principal Analyst at Digital TV Research, said: “The depth of choice in the US will not be replicated in any other country. Eight US platforms will have more than 10 million paying subs by 2025. Disney+ will just overtake Hulu by 2025.”