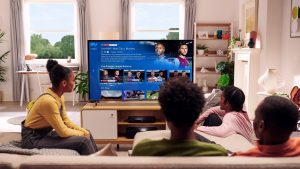 Comcast-owned operator Sky has announced a swathe of feature updates to its Sky Q set top box, including HDR support for Disney+.

The headline improvement is an expanded UI which does away with Sky Q’s static menu bar. Instead, users will be presented with a dynamic collapsible menu which is able to present a third more content. The company said that this will reduce the amount of time users spend searching for shows and films.

Also aiding this reduction in browsing time is the addition of show centres for TV series. These centres will present users with all seasons, episodes, recordings, broadcast schedules and on-demand links for a particular show together in one place. Sky also said that it will be adding a smart button to on demand content that will dynamically suggest viewing options such as resuming an episode that a user was midway through or suggesting that they watch the next episode after they’ve just finished one.

The UX improvements also come to sports fans, with Sky Q responding to voice requests for particular sports such as football and cricket with a landing page that brings together live and on demand content from sources including Sky Sports, BT Sport, terrestrial TV, YouTube and Spotify.

Voice discovery is also improving. Whereas users had to previously search for specific content, Sky promises that its voice control will be more intuitive and accommodate requests for themes and genres alongside actors.

The final update is a push for HDR, which launched on Sky Q earlier this year. Third-party SVOD Disney+ will be viewable in HDR for the first time on Sky Q, and the company said that it will add HDR to its Sky Nature, Sky Cinema and Sky originals programming by Christmas. It also said that it would add HDR to live sport in 2021.

Fraser Stirling, group chief product officer at Sky said: “We’ve redesigned Sky Q to make it even smarter, simpler and better at aggregating all of the TV and app content you love into one place. A new-look UI, improved voice search and more intuitive navigation make everything easier to find without having to search around, so you can get to the next episode of Succession, a brilliant football podcast, or choose from the most popular British dramas easily.

“And we’re not stopping there, the tech team behind Sky Q and Sky Go are working hard on loads of new updates that we’ll be rolling out every few months, so you can expect your Sky TV experience to keep getting better.”