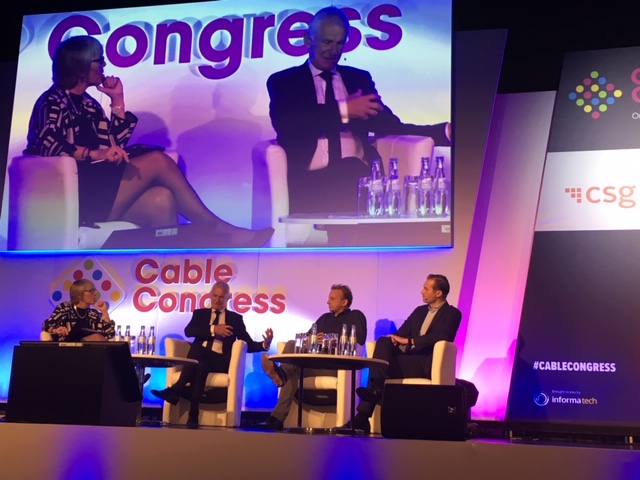 The Dutch broadband and connectivity market is one of the most attractive for investment in Europe, with two strong players – KPN and VodafoneZiggo – competing on innovation and the customer proposition, with a third challenger – Tele2 – offering additional competition, according to Christian Fangmann, director, global banking and markets at HSBC.

Speaking on a finance panel at Cable Congress, Fangmann said that Europe is desperately in need of consolidation if investment in next-generation networks is to take off, while regulators need to step back to stimulate the market.

He said that that mobile operators need to own fixed infrastructure and achieve scale. “Scale is extremely important. The downside is the bigger you get, the more inefficient you tend to be and the slower you tend to be,” he said.

Speaking on the same panel, Manuel Kohnstamm, co-chair of Cable Europe from today and chief corporate affairs officer at Liberty Global, said that the European market is still very fragmented and in need of consolidation, providing an opportunity for major players. He said that incumbent telcos had been “late to the party” with investment in fibre.

Kohnstamm said the Dutch market, where essentially two converged players were fighting it out on price and innovation, could provide a model for other markets.

Also speaking on the panel, Philip Lowe, partner at Oxera said that the aim of European regulators is to simplify regulation and harmonise the efforts of national regulators. He said there was an ongoing effort to reduce regulation.

Lowe said that there had been regulatory concern about the number of mobile players in each market but that this was changing. He said that there was a need for more nuanced regulation to allow market structures to develop with a regulatory framework that was “as flexible as possible”.