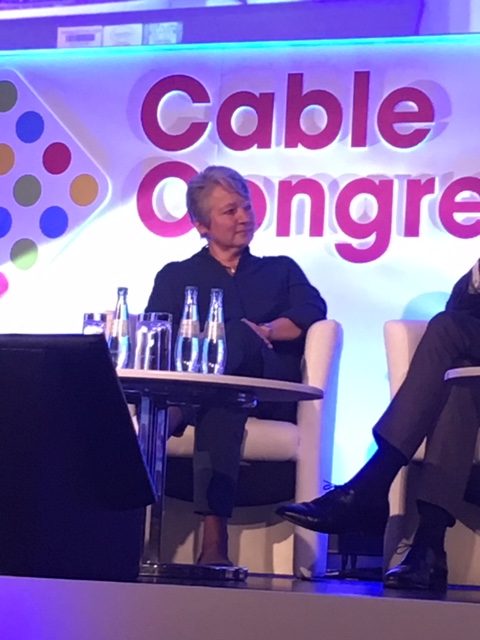 FAANG companies’ investment in new services is “going to be highly problematic” for cable’s customers because of the cost of aggregating multiple services as well as the complex environment it creates, according to .Miranda Curtis, board member, Liberty Global However, this delivers an opportunity for cable to help guide consumers through the confusing range of choices on offer, with a need for somebody to act as an aggregator of these services.

Speaking at Cable Congress in Berlin, Curtis said that cable’s ability to deliver “interconnection” between entertainment and in-home and out-of-home connectivity lies at the heart of the industry’s ability to reinvent itself, according to Curtis. She said that the extension of cable’s activity from the residential market to the enterprise market was the next stage of development.

Liberty Global has the ability to “reinvent itself every few years” and to avoid the “cookie-cutter” approach adopted by other service provider companies, for example by allowing local players to adopt their own brand identity.

Curtis also said that the rational regulatory approach adopted in Europe, at least at EU level, was helping deliver investment in high-speed connectivity.

Curtis also used her keynote to pay tribute to cable mogul and Liberty Global chairman John Malone, saying that CableLabs and the standardisation of cable broadband technology would not exist without him, among other things.

Speaking later on a panel session, Curtis said that Liberty faced a challenge in deciding how to allocate capital, with the UK in need of investment in network development in particular.

More broadly, she said, cable needed to address the wider economy beyond the consumer market. She said cable had an opportunity to “really deliver excellence…to B2B customers right across Europe”.