Cord-cutting to cause pay TV decline in APAC 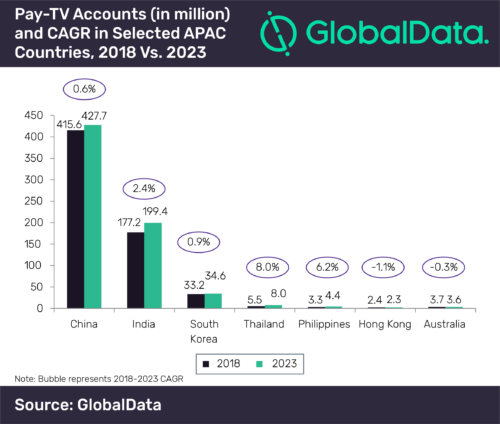 Pay TV penetration in APAC is set to decline through 2023 as a result of cord cutting.

Malcolm Rogers, telecom analyst at GlobalData, said: “The APAC pay-TV market is very diverse, with household penetration levels ranging from 11% in Indonesia to 168% in South Korea as of year-end 2018. Currently, the market is facing growing price pressure. Most OTT players offer their services at a lower price point than traditional pay-TV packages. The effect is an increasing number of consumers only willing to pay for the content they know they will watch. In response, pay-TV providers are offering more modular packages to better match consumer preferences for content and price.

“For example Taiwan’s Chunghwa Telecom offers its Multimedia On Demand (MOD) service in a menu style selection manner with variable pricing per channel from NT$5 (€0.14) to NT$150 (€4.33), based on the cost from the content provider. This enables Chunghwa to target price sensitive customers and better compete with lower cost OTT options.”

The report also concludes that there is a trend of service convergence between traditional OTT and pay TV, driven by a strong consumer desire for watch anywhere capabilities. Rogers said: “OTT video’s relationship with pay-TV in APAC continues to evolve. Many pay-TV providers in the region have launched or will soon launch their own OTT platforms. Standalone OTT players are also increasingly seeking pay-TV provider partnerships. The pay-TV and OTT platforms are becoming increasingly integrated as customers want a device agnostic viewing experience.”