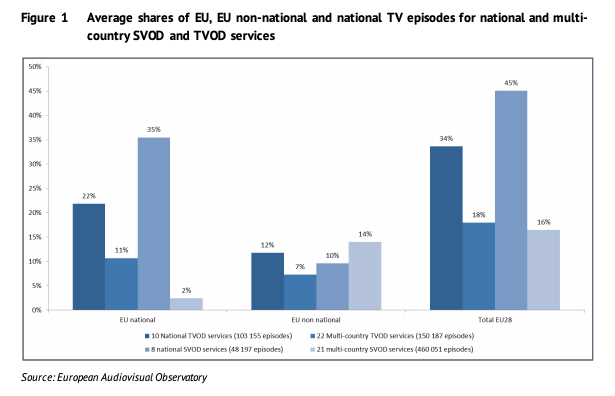 According to the report, national  TV series episodes make up  the majority of European TV episodes on pay per view or transactional VOD services, accounting for 62% of the total. However, they represent a minority of 32% on subscription VOD services.

Content from outside the EU and outside the US represents a significant part of TV content on offer in SVOD, and there are more non-EU/non-US titles and episodes available in SVOD than EU titles/episodes, according to the report.

The report is based on the analysis of 29 SVOD catalogues and 32 TVOD catalogues.. The data was collected during November and December 2018

The SVOD sample is based on 16 Netflix country catalogues, with an average 1,018 cumulated titles, but with significant differences between markets. Only Now TV in the UK has a comparable sized catalogue, with 744 titles.