Rise of IPTV to benefit Telcos 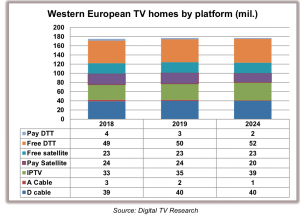 IPTV is gaining subscribers at the expense of other pay TV platforms, with IPTV overtaking satellite TV in 2015. It is predicted that it will reach similar figures to cable by 2024, adding 5.5 million subscribers between 2018 and 2024.

“This marks a sea change for Western Europe’s pay TV sector. Pay TV is not the priority for telcos – broadband and mobile provision are at the forefront.”

The report predicts that the geographic region will have 101.59 million pay TV subscribers by 2024. Germany will contribute a quarter of the total, followed by the UK (15%) and France (14%).

Pay satellite TV will lose 4 million subscribers between 2018 and 2024 – usually as homes convert to platforms with bundles – to reach 20.33 million.

The UK will lose $1 billion over this period, but will remain the most lucrative pay TV market. Italy will fall by $823 million – or 24% – due mainly to Mediaset’s conversion from pay DTT to online.