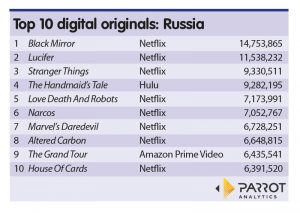 Black Mirror sits atop Parrot Analytics’ list of in-demand digital originals in Russia for the week ending May 19, with Netflix dominating the charts as expected.

Indicating Netflix’s dominance, the rest of the list is made up of titles such as Love, Death And Robots, Narcos and Altered Carbon.