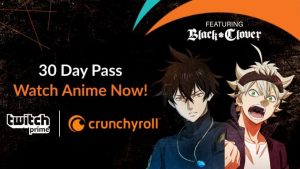 Videogame streaming platform Twitch, has announced that its latest ‘loot’ for Prime members is a 30-day subscription to anime streaming service Crunchyroll.

Twitch Prime, the platform’s equivalent of Amazon Prime, offers subscribers monthly ‘loot’. These usually come in the form of free games or in-game items, but this deal with Crunchyroll marks the first non-gaming related perk.

Crunchyroll is a well-established name in online streaming, with more than 45 million registered users and 2 million subscribers to the paid premium tier. Its library is made up of more than 1,000 series and 30,000 episodes. It has had a long relationship with Twitch, operating its own channel and making it the home of its annual Anime Awards show.

Eric Berman, head of partnerships at Crunchyroll, said: “While we constantly focus on delighting Crunchyroll fans, we also feel it’s our responsibility to continue to proliferate the popularity of anime to new audiences

“We pride ourselves on working with like-minded, fan-focused partners and are excited to offer all Twitch Prime members a free pass to Crunchyroll right in time for the huge spring anime season.”

This perk is double the length of Crunchyroll’s own free trial and does not require users to insert any card information.