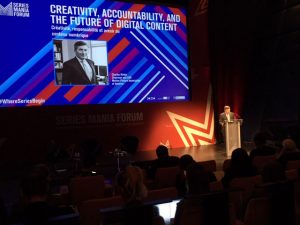 Stopping piracy “should be a constant in virtually any debate” and recognising copyright is “critical” to content creation, according to Charles Rivkin, Chairman and CEO of the Motion Picture Association of America (MPAA).

Speaking at the Series Mania event, Rivkin said that local and international players were now deeply intertwined, citing the example of Constantin Film’s relationship with Netflix, and HBO’s collaboration with Rai to make My Brilliant Friend.“In this shared ecosystem our interests are the same: engaging audiences internationally,” he said. “Everything is now shared around the world at hyper-speed.”

Because content is now international, it is important to find ways to support collaboration, said Rivkin, with the ‘number one’ concern being content protection. Rivkin said that Hannibal, a hugely successful series, had been cancelled because one third of the audience had come from pirated sites.

“Piracy is pervasive and robs everybody in the value chain,” he said. He said that large scale illicit enterprises threatened jobs and value of companies, as well as leading to identify theft through malware.

Rivkin also took what could most easily be interpreted as a sideswing at European moves to restrict the geoblocking of content and the prevention of territory-limited rights to further its single market goals. He said producers need the ability to license rights in the best way to reach their audiences, including licensing territory by territory. He said it was “critical” that people who own the rights have the freedom to exploit them as they see fit.

Rivkin also took the opportunity to highlight the role of the Alliance for Creativity and Entertainment in fighting piracy. The said that ACE had brought together stakeholders, complementing the work of the likes of ALPA in France.