TiVo: multi-service use now the norm with Netflix ‘essential’

Multi-service use of pay TV and OTT offerings is becoming the norm, with the average North American household using 2.75 services, up 26% since 2017, according to TiVo. 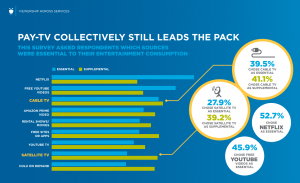 The company’s latest Video Trends Report found that Netflix was the service most frequently selected as ‘essential’ to how consumers receive entertainment, with 52.7% of respondents choosing it. This was followed by free YouTube videos at 45.9% and then cable TV at 39.5%.

A greater proportion of people, at 41.1%, chose cable TV as supplementary rather than essential. This split wasn’t seen by Netflix, which was considered a supplemental service by only 30% of respondents.

“As service clustering increases, it’s important to note that a sizable portion of respondents are still ‘cord-only’ users, though this group tends to be older,” according to the report.

The research found that 30.7% of respondents were not using any major monthly OTT/SVOD services and said that this partially aligns with the 21.5% who only have linear pay TV.

“Overall, consumers are using a variety of services, and with the exception of several ever-popular categories (pay TV and Netflix, for example), they’re not flocking to any particular content providers or services. Instead, they’re demanding more content from more sources than ever before.”

The research was based on a survey of 4,458 people aged 18 and over in the US and Canada that was conducted in the fourth quarter of 2018.