The three most important factors for consumers choosing video services in India are pricing, local Indian content, and quality dubbing and subtitling, according to IHS Markit. 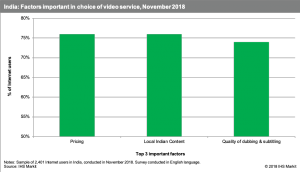 The research firm said that “localised content is as important as price,” but added that out of all the markets it surveyed, Indian consumers were most likely to cite price as an important factor in their video service decisions.

In India, IHS estimates that the average revenue per user (ARPU) for pay TV is US$3.7 (USD) per month – with satellite pay TV services reaching an average of US$4 while local over-the top services cost less than US$1 per month on average. By comparison, Netflix’s basic monthly package is currently priced at around US$7 per month in India.

According to the research, online subscription services will grow faster than pay TV in India in the coming years but will still account for a much smaller share of the market.

According to IHS stats, Star India’s 2016-launched Hotstar Premium subscription service will grow its Indian subscriber base by 60% in 2018, accounting for 25% of the market’s online video subscriptions – thanks to largely to its investments in premium sports, local-language content and international fare from the likes of HBO, Disney and Fox.

“The importance on localised content to Indian consumers highlights the prominence and success of India’s network TV and Bollywood content,” said Begum. “It also presents several hurdles global players must overcome in order to increase their subscriber bases in the market.”