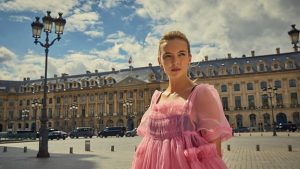 The BBC iPlayer on-demand service recorded its strongest month to date in October, boosted by the popularity of hit series Killing Eve, Doctor Who and The Cry.

BBC iPlayer recorded 334 million requests in October, up 18% year-on-year, with a new record for average daily requests of 10.8 million.

Based on number of requests, October beat all previous records, surpassing this January’s score of 328 million and last December’s 327 million.

Killing Eve had six episodes in the top ten. The first episode is the most popular programme of the month, with over 3.5m requests, followed by Jodie Whittaker’s first episode as the Doctor in the new series of Doctor Who, with over 2.9m requests. 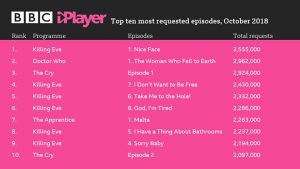 TV platforms accounted for 56% of all iPlayer requests in October. Requests for live programmes remained consistent at 16%.

Dan McGolpin, controller of programming for the BBC, said: “It’s been a fantastic autumn for BBC iPlayer. Bodyguard and Killing Eve are the two strongest performing series ever and in October we set a new record for daily requests, which gave us our highest ever monthly total. Together with the return of Doctor Who, The Apprentice and Strictly BBC iPlayer offers a unique mix of brand new programmes alongside some of the nation’s best-loved shows.”