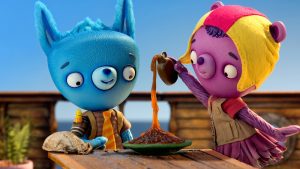 Produced by Amazon Studios and Bix Pix Entertainment for Amazon Prime Video, Tumble Leaf follows a blue fox named Fig and his caterpillar friends as they go on adventures to learn about science. The show was created by Kelli Bixler and Drew Hodges.

Amazon was nominated in last year’s International category for Melody 1963: Love Has To Win and The Snowy Day, but ultimately lost out to Nickelodeon’s SpongeBob SquarePants.

Despite the global SVOD’s victory, the big winner at this year’s awards, which were presented on Sunday (November 25) in London, was CBeebies show Hey Duggee, which picked up three prizes, including Pre-School Animation, Digital and the newly introduced Directing honour.

CBeebies also won Channel of the Year, beating the likes of CBBC, Hopster and TrueTube, and marking its sixth triumph in the category since the prize was introduced in 2006.

First-time nominees Chloe Lea and Tom Bidwell won for their work on Katy, in the Young Performer and Writer categories, while Tom Courtenay won the Best Performer award for his role as Grandpa in Grandpa’s Great Escape.

TrueTube also conquered the Short Form category for Origins, a film that explores the influence of a person’s upbringing on their life.

Clive Juster, the producer of iconic children’s TV shows such as Mr Benn, King Rollo, Towser, Spot the Dog and Maisy Mouse and Paz, received the Special Award for his outstanding contribution to children’s media.