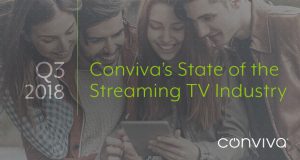 According to its State of the Streaming TV Industry Report for Q3 2018, Conviva found a “staggering growth” in global TV streaming with a 52% jump in plays and 63% growth in total viewing hours compared to last year, including a major increase in traffic during the World Cup.

“Streaming TV consumption shows no signs of slowing down, and publishers have stepped up to the plate, delivering better quality and reliability that viewers have come to expect,” said Conviva CEO Bill Demas.

“The demand for quality is pushing connected TVs to the top in terms of device share, commanding more than 50% of total viewing hours at the expense of PCs that have lost 7% while mobile remains relatively flat.”

According to the report, connected TV plays and viewing hours more than doubled, while virtual MVPDs are gaining traction with US viewers with 292% more plays and 212% more viewing hours year-on-year in this market.

Data for the report was collected using Conviva’s proprietary sensor technology, which it claims is embedded in three billion streaming video applications.