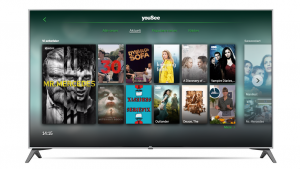 Danish telco TDC has launched a new app for its YouSee TV service on LG TVs, which the company says account for TVs in a quarter of Danish homes.

The app, YouSee TV & Film, can be downloaded via the app menu on the LG TV, enabling users to access the same content available via the set-top box. The streaming service is free for all YouSee TV customers, and can be accessed on LG models from 2015 onwards.

The launch of the LG smart TV app follows hard on YouSee’s launch of an app for Apple TV. Jacob Mortensen, managing director of YouSee, said that TV was “the most popular streaming platform” and that the new app could be relevant for second TVs in the home and for TVs in holiday homes.

Mortensen said that with the launch last year of an app for Android TV and launches this year for Samsung smart TVs and Apple TV, the LG launch meant that YouSee was close to targeting all the key platform that Danes use to stream content.

He said that YouSee was now developing an app for PlayStation 4, but that a launch date had not been set.

“I am very pleased that we are now covering all the major platforms in Denmark and allowing our customers to get a really good virtual TV experience when using one or more of our apps,” he said.