More than a third of video subscribers across five key markets now claim that ultra HD content is important in their choice of both paid-for and free video services, according to IHS Markit. 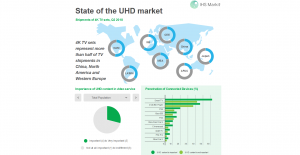 The research, which surveyed viewers in the US, UK, Germany, Japan and Brazil, found that respondents between the ages of 17 and 44 were most interested in UHD content, with men aged 25 to 34 the keenest on the technology.

“The preference for high-resolution video is in line with the growing, albeit small, number of UHD titles available and the rising penetration of 4K-capable TV sets,” according to the report.

“IHS Markit research reveals that more than four in 10 TV sets shipped globally in the second quarter of 2018 were 4K capable.”

IHS estimates that more than one-third of active internet-connected TV sets are currently 4K enabled, with that number tipped to grow as 4K TVs now comprise more than half of all TV shipments in China, North America and Western Europe.

Consumers who said that UHD content played a role in their choice of video services were also more likely than others to own connectable video devices – particularly games consoles and over-the-top streaming devices, like Apple TV, Chromecast, PS4 Pro and Xbox One X.