Google has updated its Chromecast streaming player, promising a 15% improvement in hardware speed for the same price as the previous generation model. 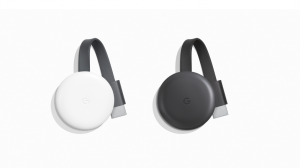 The updated Chromecast will support streamed content in 1080p resolution at 60 frames per second, offering what Google described as “a more lifelike image”.

It will also work seamlessly with Google Home speakers, allowing users with compatible services to use voice commands to start watching programmes.

Other new features include more personalisation, with viewers able to display pictures from Google Photos on their TV when they are not watching something.

Later this year users will also be able to add ‘Chromecast to speaker groups’ so that they can listen to music in sync throughout their house.

The new version of the Chromecast comes in two colours – black or white, or as Google terms it, “chalk and charcoal”. The device costs US$35 in the US and £35 in the UK.

The device is available from the Google Store from this week in Australia, Canada, Denmark, Finland, the UK, Japan, Netherlands, New Zealand, Norway, Singapore, Sweden, and the US, with more countries to follow in 2019.

The launch comes five years on from Chromecast’s 2013 debut and was unveiled at the Made by Google event alongside other new hardware, including the Pixel 3 and Pixel 3 XL phones, the Pixel Slate tablet and the latest addition to the Google Home family, the Google Home Hub.