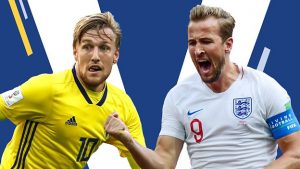 The BBC saw usage of its BBC iPlayer service grow by 19% year-on-year in July, with World Cup football and Wimbledon boosting usage of the service and leading to live viewing making up 22% of all iPlayer requests for the month.

The latest statistics released by the BBC about iPlayer showed that iPlayer requests reached 281 million in July. Live requests had in fact been even higher in June, when the group state of the World Cup took them to 26% of all requests, the highest level since the Rio Olympics in 2016.

The World Cup dominated the most popular episodes listing for iPlayer in July, led by the quarter final match between England and 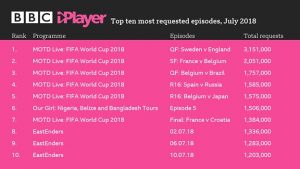 Drama series Our Girl was the top-rated non-football show with 1.5 million requests. Other highly rated shows in July included Picnic at Hanging Rock and Hidden.

Dan McGolpin, controller of programming and daytime, BBC Content, said: “It’s been an incredible summer of sport on the BBC, and that together with our summer box sets selection has helped BBC iPlayer to grow strongly on last year. England’s quarter-final against Sweden was the BBC’s highest online-viewed live programme ever.”