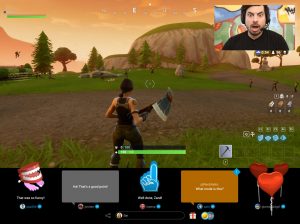 Fox invested in both Caffeine, which is currently still in a ‘pre-release’ phase pending its official launch, and a newly formed venture called Caffeine Studios, which is jointly owned by Fox Sports and Caffeine.

At the same time, Caffeine announced a content agreement with Live Nation to bring live music concerts to its social broadcast platform in the fourth quarter of this year, offering fans “a new way to experience their favourite musical acts”.

Fox led a funding round that also included participation from existing Caffeine investors Andreessen Horowitz and Greylock Partners, alongside other unnamed partners. The full value of the round was not disclosed.

“We want to bring the world together around friends and live broadcasts,” said Caffeine CEO Keighran. “It’s an ambitious goal, but one we believe is attainable with the support of our amazing new partners, our awesome and ever-growing community, and the content that together, we can bring onto the platform.”

When Keighran first unveiled Caffeine in January, he claimed the service had been 20 months in the making but was something he’d been dreaming about for much longer – a “re-imagined experience for live broadcasters and their audiences”.

Keighran sold his previous company, a search startup called Chomp, to Apple in 2012. He continued working at Apple until 2016 where he was credited as playing a key role in creating the Apple TV box.

Caffeine co-founder Sam Roberts is also a former Apple employee, who worked at the firm from 2008 to 2014, latterly as a senior user experience designer.

Lachlan Murdoch, 21CF’s executive chairman, said: “The combination of the Caffeine platform with a content studio that benefits from Fox Sports’ expertise in live events and programming will help position Caffeine to deliver compelling experiences in eSports, video gaming and entertainment.”

“We are excited to partner with Caffeine and build something special for fans in the growing live social streaming esports and gaming space.”

With Fox’s investment, Murdoch joins Caffeine’s board, while the company’s stakes in Caffeine and Caffeine Studios will be part of the proposed new Fox, which will be formed upon completion of the planned deal between 21CF and The Walt Disney Company.

Caffeine said it will continue to release new features and functionality, as well as content from a host of new partners, as it heads toward its official launch.