LG rolls out Google Assistant on TVs in more markets

LG is set to launch Google Assistant on its TVs in seven more markets in the fourth quarter as part of its efforts to “raise the bar for voice recognition solutions”. 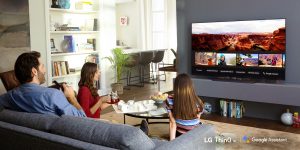 The voice assistant will be available in Australia, Canada, France, Germany, South Korea, Spain and the United Kingdom with support in five languages.

The rollout will apply to LG’s 2018 webOS-based TVs that have the manufacturer’s ThinQ artificial intelligence technology built in.

The technology will allow users to hold the mic button on their TV remote and ask for information, such as the weather forecast or the latest sports scores. Viewers will also be able to control compatible smart home devices using voice commands.

“LG’s vision is to become a major name in all things AI based on our philosophy of open platform, open partnership and open connectivity,” said Brian Kwon, president of LG Home Entertainment Company.

“Beyond the unrivaled picture quality that LG’s premium TVs deliver, the Google Assistant offers even more consumers a new level of intelligence in the home, aligned with LG’s mission to improve the daily lives of its customers through forward-thinking technology.”

LG first announced that Google Assistant would be built into its TVs at the Consumer Electronics Show in Las Vegas earlier this year, with the service debuting in the US in the second quarter.