Ampere: Netflix password sharing done by less than 10% of users

Netflix password sharing is done in less than one in ten homes globally that take the service, with the practise “not as prolific as many believe,” according to Ampere Analysis. 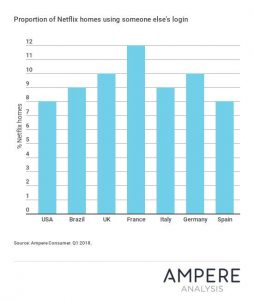 The research firm said that while account sharing by Netflix users is higher than with other SVOD services like Amazon Prime, the amount of password sharing that takes place varies by market.

The least amount of Netflix was sharing is in the US, although countries with usually high rates of piracy such as Brazil and Spain were also found to have some of the lowest levels of sharing.

France had the highest percentage of shared access but the lowest level of Netflix uptake. Ampere said this may point to a correlation between established Netflix markets having less shared use.

“There is a widely-held belief that password sharing among Netflix homes is rife, but our data is telling a different story,” said Ampere Analysis research director, Guy Bisson. “One of the most striking things about account sharing on Netflix is that it’s amazingly consistent across markets.

“What this 9% grey area means to an optimist is that Netflix has a potential revenue gain that can be switched on at will by locking down account sharing, but it’s more likely to be seen as an additional – and likely very effective – marketing and subscriber acquisition cost.”

Ampere said that 4% of Amazon Prime users share accounts, around half the level of Netflix users that do the same.