Linear TV viewing time declined year-on-year across the top five European markets in 2017 as the share of viewing time for online platforms increased, according to IHS Markit. 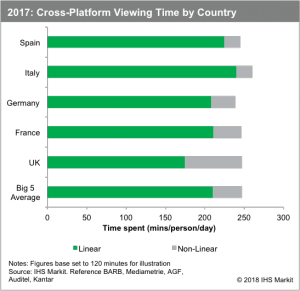 At the same time, UK daily linear viewing time declined by more than eight minutes per person in 2017, as PVR time shifting also declined for the second consecutive year, said the report.

In France online long-form viewing time was found to have increased by 41.6% year-over-year in 2017, or by approximately five additional viewing minutes per-person per-day. Netflix accounted for three out of four French OTT subscriptions in 2017, while CanalPlay experienced subscription declined.

“The shift to OTT consumption signals the need for pay TV operators to act quickly, in order to retain their foothold in the market,” said Rob Moyser, TV and online video analyst, IHS Markit.

“Leading operators are already enhancing their current propositions and embracing OTT, to ensure they capture some of the time spent on other devices and services, so they can stay at the forefront of consumers’ minds.”

IHS Markit’s associate director of connected devices and media consumption, Fateha Begum, said: “With the increasing volume of consumption moving away from traditional linear broadcast, monetisation of on-demand and time-shifted viewing remains a key concern, as ad-insertion and tracking technology has been slow to keep up. However, pay TV operators are still primarily concerned with retaining subscription revenues, for the time being.”