E.W. Scripps, which owns 33 local TV stations in the US, said that subscribers to over-the-top services in its local broadcast markets grew from zero to nearly 500,000 from last July to March. 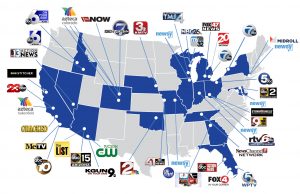 Announcing the company’s second quarter results, Scripps president and CEO Adam Symson said that in its local media division “any losses we’re seeing from cable and satellite platforms are being mitigated, leading to higher-than-anticipated retransmission revenue.”

Overall the company reported revenues of US$283 million compared to US$216 million in the same quarter a year earlier. Income from continuing operations, net of tax, came to US$8.7 million, up from US$6.9 million a year earlier. Net income was US$5.7 million down from US$8.5 million in Q2 2017.

Scripps Networks Interactive was spun out from E.W. Scripps in 2008. This company was recently acquired by Discovery for US$14.6 billion, with the deal closing in March.