The UK has promised to seek the “best possible arrangements” for the broadcast sector in its white paper on Brexit, but broadcasters have criticised the lack of clarity set out in the government’s plan. 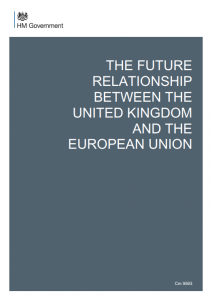 The government’s ‘The future relationship between the United Kingdom and the European Union’ white paper, which was published yesterday, promised a “detailed proposal for a principled and practical Brexit”.

However, a section on broadcasting did not give further detail on what will happen to the roughly 650 international channels that are based in the UK and can currently broadcast into any other EU member country – a rule that will not automatically carry over after Brexit.

“The UK is leaving the Single Market. As a result, the ‘country of origin’ principle, in which a company based in one member state can be licenced by a national regulator and broadcast into any other member state, will no longer apply,” yesterday’s white paper confirmed.

“The UK is seeking the best possible arrangements for this sector.”

The Commercial Broadcasters Association (COBA), which earlier this week called for “urgent clarity” on whether there will be a post-Brexit transition period that will retain the status quo for broadcasters licensed in the UK, was critical of the government’s response to this issue.

In a statement, COBA said the white paper provides little detail on the type of arrangements the UK is seeking in its negotiations with the EU on broadcasting. It also warned that broadcasters cannot wait until March 2019 to undertake any necessary restructuring.

“This is a £1 billion, high growth sector that should be central to the future of the UK’s audio-visual sector,” said COBA executive director Adam Minns. “We remain deeply concerned that broadcasters will have to reluctantly start restructuring within the next few months, and possibly within weeks for some companies.”

While the government gave little clarity on the country of origin issue, it did set out a number of other broadcasting principles – including a guarantee that Irish language broadcasting in Northern Ireland by RTE and TG4 will continue through UK statutory and domestic provisions.

The white paper also said that UK programming will continue to be classified as European as far as the European Works content quota is concerned. This quota requires broadcasters to reserve a certain amount of air time for commercial works – or in the case of on-demand services to promote the production of and access to European works.

“The European Works content quota applies to works which originate in Member States and non-EU European countries which are party to the European Convention on Transfrontier Television of the Council of Europe (CTT),” said the white paper.

“As confirmed in the EU’s ‘Notice to Stakeholders’ in the field of audiovisual media services, works originating in the UK will continue to be classed as European works. The UK’s position as a party to the CTT will not be affected by the UK’s withdrawal from the EU, and therefore the UK will continue to be able to treat audiovisual works originating in the EU as European works.”

UK Prime Minister Theresa May first said in her Mansion House speech in March that the UK should seek options that will allow continued ‘transfrontier broadcasting’ following Brexit but will not remain part of the EU’s Digital Single Market.

At the time she commented: “We should explore creative options with an open mind, including mutual recognition which would allow for continued transfrontier broadcasting – recognising the enriching role that British broadcasters and programme makers play, not only in British, but more broadly in our common European culture.”

COBA is a trade body for UK multichannel broadcasters and on-demand services. It represents members including A+E, Discovery, Fox, NBCUniversal and Scripps.