Sports streamer DAZN scoops up live rights to Serie A 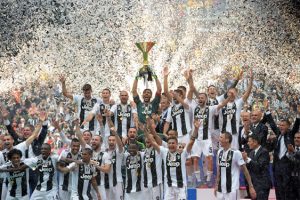 Sports streaming service DAZN has announced its expansion into Italy following parent company Perform Group’s successful bid to secure exclusive multi-platform rights to 114 Serie A matches per season over the next three years. The deal follows yesterday’s news that Sky Italia has also secured a large tranche of Serie A rights following the annulment of a previous deal between Mediapro and Serie A.

DAZN says its own deal is the first time a pure live and on demand streaming service has been awarded exclusive Serie A rights in Italy. The deal, which commences at the start of the 2018/19 season, will give it access to three live games a week plus all Serie A highlights. All matches streamed by DAZN will be available both live and on demand, on a wide range of devices, including smart TVs, PCs, smartphones, tablets and games consoles. A monthly subscription is €9.99 with a one-month free trial and no contractual lock ins.

James Rushton, CEO of DAZN, said the company is the world’s first pure sport OTT offer, which will do for sport what Netflix did for TV and what Spotify did for music: “The sport industry is ripe for disruption. Consumer behaviour has been transformed by technology, with streaming becoming the new norm for viewing content. DAZN suits the changing needs of today’s sports fans. Since launching almost two years ago, we have disrupted the industry in multiple markets as we change the way the world sees sport.”

DAZN is already active as a multisport service in markets such as Germany, Austria, Switzerland, Japan and Canada. Rushton added that: “Our entry into Italy with Serie A rights is the first of many announcements we expect to make in the coming weeks as we reveal a range of premium sports rights to create a multi-sport offering that is accessible, affordable and lives up to our fans first philosophy.”