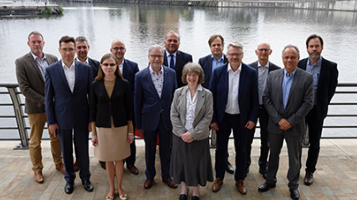 Parnall, who becomes the first female chair in the history of the EBU’s technical governance body, was already a member of the technical committee and will be supported by vice-chairs Olli Sipilä of Finnish broadcaster Yle and Thomas Saner of Switzerland’s SRG SSR during her two-year term.

Their nine colleagues on the newly elected committee include four elected for the first time: François-Xavier Georget of France Télévisions, Józef Wacnik of PR, Brian Wynne of RTÉ and Michael Eberhard SWR.

The committee is elected by the technical assembly, comprising technical directors and managers who represent their respective EBU member organizations.

Separately, the EBU has called for a dedicated media innovation funding scheme to be established as part of Horizon Europe – the new research and innovation framework programme proposed by the European Commission to succeed the Horizon 2020 programme.

On May 24, the EBU participated in a debate with representatives from the European Parliament, European Commission and a variety of media organisations to discuss the challenges facing media innovation.

Media sector representatives highlighted the need for more significant funding and investment to support research and innovation in the media and creative sectors.

“Europe’s strong tradition of investing in innovation and R&D for media and broadcasting is undeniable. However, to support innovation and creativity in the European media sector, we need to bridge the current gaps between technological innovation, creative content production and R&D,” said director-general Noel Curran.

“To this end, it is crucial that the new Research and Innovation Framework Programme, Horizon Europe, establishes a dedicated funding programme for media innovation. The creation of such scheme would lay the foundations for well-resourced collaboration in media technology research, which would help unleash its potential and, more importantly, ensure that the European media sector remains relevant in an increasingly competitive global market.”