Bosnian pay TV market on the up, Says Kagan S&P 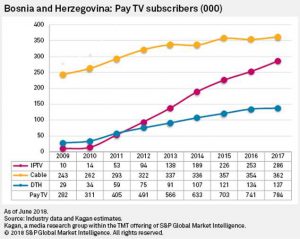 With growth fuelled by demand for triple-play services and premium content, the Balkan market of Bosnia and Herzegovina has grown by 60% over the last five years, according to a new report from Kagan, S&P Global Market Intelligence. As a result, says the research firm, pay TV penetration reached 74% as of year-end 2017.

As in neighbouring Serbia, Kagan S&P said cable is the leading platform in the country – though IPTV is increasing in significance. Of the country’s 1.1 million TV households, 361,800 are cable subscribers, the large majority with Telemach. 285,600 are IPTV – with Mtel, BH Telecom and HT Mostar the key players in this fast-growing category. By contrast, DTH has struggled to gain a foothold in this small market and is stagnating, says Kagan S&P, with 137,000 subscribers. All told, 784,400 subscribe to pay TV via 41 operators.

As for the future, the report says: “In the Bosnia and Herzegovina pay TV market, the future should bring further growth for IPTV as a result of network capacity upgrades and deployment of fiber-to-the-home. Cable should maintain its elevated presence in the future due to highly competitive bundle offers. The relatively low DTH uptake makes pay DTT a viable option in rural areas not covered by wireline operators.” Previous work from Kagan S&P has identified Bosnia and Herzegovina as a market with a likelihood for Pay-DTT emergence.