The BBC has announced two “cutting edge” trials that will see it bring this summer’s FIFA World Cup live to viewers in ultra high definition (UHD) and virtual reality (VR). 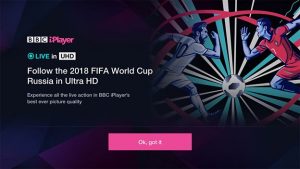 All 29 World Cup matches that the BBC is due to broadcast on BBC One will also be available in UHD and high dynamic range (HDR) on the iPlayer – but only as part of a limited trial.

“This trial will be available to tens of thousands of people to watch on a first-come, first-served basis,” said the BBC in statement.

The UHD stream will be available from the iPlayer homescreen from as soon as the programme coverage begins until trial capacity is reached for that match.

The BBC said that it will use the data it gathers from the trial to help it optimise UHD delivery in the future and to prepare for a time when “delivering such large-scale events in such high quality, for larger audiences, over the open internet is normal.”

On the VR front, the BBC will launch a dedicated BBC Sport VR – FIFA World Cup Russia 2018 app, which will be available on Apple, Android, Gear VR, Oculus Go and PlayStation VR devices.

The app will let viewers watch live coverage of all 33 BBC matches from a virtual ‘luxury private box’ in a Russian football stadium.

Viewers will look out on the pitch from a virtual BBC Sport sofa and will also be able to change view to behind either goal so they can get closer to the action.

The VR app will also present users with a range of live match stats, which will emerge from a virtual coffee table. When there is no live game viewers will be able to watch highlights on a virtual big-screen TV.

“The BBC has brought major live broadcasting breakthroughs to UK audiences throughout the history of the World Cup,” said Matthew Postgate, the BBC’s chief technology and product officer.

“From the very first tournament on TV in 1954 and England’s finest hour in 1966, to the first colour World Cup in 1970 and full HD in 2006. Now, with these trials we’re giving audiences yet another taste of the future.”

The BBC’s UHD coverage will be available using the Hybrid Log-Gamma version of HDR, which the BBC co-developed with Japanese broadcaster NHK. It will broadcast the matches at 50 frames per-second.

Viewers will need an internet connection of at least 40 Mbps for the full 3840 pixel Ultra HD image or 20Mbps for 2560 pixel UHD.

For VR, the BBC recommends watching live coverage with a connection of at least a 10Mbps.