Three in 10 Spanish internet-connected households used premium online video services in Q4 2017, with the number of homes subscribing to Netflix trebling in 2017, according to Spanish market regulator the CNMC. 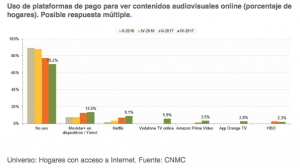 The CNMC found that Spaniards were spending on average three hours in front of the TV screen on weekdays, compared with two and a half hours viewing video on other devices such as mobile phones, tablets and computers. However, among the 16-24 age group, time spent viewing video on computers, tablets and mobiles amounted to 4.7 hours exceeded the average of 2.2 hours spent watching TV.

The regulator’s study of its household panel also found that four in 10 Spaniards watch video content on the internet at least once a week, with half of those viewing catch-up TV.

YouTube is the most used online audiovisual platform, accounting for 55% of usage, followed by broadcaster Atresmedia’s Atresplayer servie at 39%, public broadcaster service RTVE.es at 32% and Mediaset’s MiTele at 31%.

Two in 10 users of audiovisual services online and OTT TV admitted to using ad blockers, while some 19% were unaware of their existence.

Mobile phones were the devices most frequently employed to access the web, used by 85% compared with 53% using laptops, 41% using desktops and 37% using tablets.