Watching television remains the activity that children aged three to 16 dedicate the most time to, according to Futuresource Consulting’s latest Kids Tech Consumer Survey. 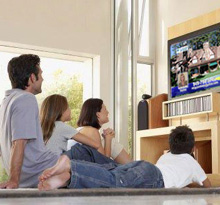 Across the surveyed countries – which included the UK, France, Germany, US, China, South Korea, Indonesia, Mexico and Brazil – kids were found to spend an average of 4.8 hours per week watching TV.

This compared to 3.9 hours participating in active play and 3.5 hours watching TV and or video content on mobile devices.

Children in the US were found to watch most TV at close to one hour per day, while kids in China bucked the trend by dedicating more time to active play that TV viewing.

While TV overall remained the top activity for children, the research noted that TV viewing “isn’t necessarily commanding the most attention”.

Some 63% of children across the surveyed territories were found to use other electronic devices while watching TV, with this figure rising to 75% among 13-16 year-olds.

Half of these kids said they play mobile games while watching TV, while close to a third watch other video content. Among older children, social media and online chat was undertaken most frequently, by 55%.

“Our latest round of research confirmed that the TV set is still the go-to platform for the majority of kids, but second-screen viewing continues to rise, particularly in the UK and US where around half of kids are regular consumers of TV and video content on portable screens,” said Carl Hibbert, associate director of consumer media and technology at Futuresource Consulting.

“In Germany and China, this trend is much more conservative, falling to just a third of kids. It may not be surprising to hear that YouTube consumes much of kids’ digital attention, with over a third of kids in the US consuming over five hours of YouTube content per week.

“Perhaps of more significance is that consumption time across the week remains relatively stable across age ranges, as social media eats into the free-time of the older ranges.”

Futuresource said that while most social network sites are aimed at the older age groups, 54% of under 13-year olds still access them.

Among 13-16-year olds, 92% were found to be on social media and 70% were on Facebook. Facebook-owned services, WhatsApp and Instagram, had  uptake of 49% and 45% respectively among this age group, according to the study.