Bolloré held in custody in relation to Africa corruption case

Vincent Bolloré has been held in custody by French police in relation to a corruption enquiry concerning container terminals operated by Bolloré Group in Togo and Guinea, according to press reports. 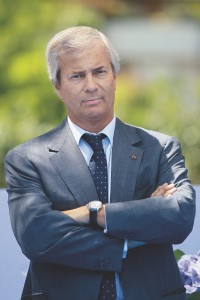 According to Le Monde, Nanterre judicial police have taken the billionaire businessman and former Vivendi chairman into custody in relation to an enquiry into the alleged corruption of foreign public officials. The investigation concerns contracts awarded to Bolloré Group to operate container terminals in Lomé, Togo, and Conakry, Guinea, in 2010.

According to the report, officials suspect that Bolloré Group managers used advertising subsidiary Havas – now owned by Vivendi – to help secure the election of officials by providing assistance at a discounted rate.

Other executives have been also taken into custody, including Bolloré CEO Gilles Alix and Jean-Philippe Dorent, responsible for Havas’ international operations, according to Le Monde.

Dorent was reportedly involved in the 2010 Guinean presidential campaign of Alpha Condé, a one-time exile in France and acquaintance of Vincent Bolloré. Condé is alleged to have been instrumental in helping Bolloré Group secure the Conakry contract.

Bolloré’s winning of the contract led to legal action by French group Necotrans, which previously held the concession. Necotrans subsequently dropped the action after striking a deal to sell its Gabon operation to Bolloré.

According to Challenges.fr, police have also held Francis Pérez, the head of Spanish firm Pefaco, which operates a number of hotels and casinos in Africa, and an acquaintance of Dorent.

Bolloré Group issued a statement denying that its affiliate SDV Afrique had been involved in any irregularities and said that the questioning of its executives would substantiate this. It said that the issues raised had already been the subject of an independent audit that had concluded all operations had been regular.

The group said that it was a long-term investor in Africa. It said that it had obtained the Togo concession in 2001, before it acquired a stake in Havas, and that its winning of the Guinea contract followed the failure of the group that initially placed the highest bid, which had occurred before the election of Condé.

The news comes after Bolloré recently announced that he was stepping down as Vivendi chairman and handing the reins over to his son Yannick, chairman and CEO of Havas.