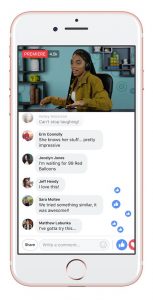 That’s according to Facebook vice president of product, Fidji Simo, who revealed that Facebook is testing the new format with a group of video creators, publishers and shows, and plans to roll it out more broadly “soon”.

In a post on the social network, Simo said that Facebook Premieres will let Facebook publishers and content creators release pre-recorded videos as “a live moment” so that people can interact and experience it together.

“Premieres bring fans and content creators together in a whole new way on Facebook,” said Simo. “Premieres can help publishers and creators build anticipation leading up to the debut of new videos and offer the opportunity to engage with audiences directly every time a new video is posted.”

Watch Parties let members of a Facebook group watch, comment and react to the same moments together to create a shared viewing experience.